I purchased a ukulele online around 15 years ago for a mere $30. I got into it a little bit after watching "A concert for George", which was a concert performed by friends of George Harrison of the Beatles a year after his death. It was said that George used to bring 2 ukes with him no matter where he went, so this way you could play the uke with him. I found this to be a charming story and decided to buy one and try out the little stringed instrument. I got into for awhile, but would rarely play it. Several years later, and around 6 or 7 years in with building guitars, one of my supplier's StewMac had a special running on Ukulele Kits. I never built any instruments from a kit, but the price was enticing. The box cam in and was put on a shelf for a couple of years and one day StewMac posted a series of videos on how to build the uke from their kits and I bit. I was engrossed immediately! As I watched the videos, I kept on saying to myself that I could do "this" instead of what they supplied, first the fingerboard, then the neck, then the headstock shape then the bridge, then put in your own rosette, etc... I was already modifying the kit they sent me without even opening the box! I was bit immediately by the uke builder's bug during the building of this uke and even went as far as to put on a Frrench polish for the finish(3 weeks of labor, really intense and not sure if I'll do that one again!) by the end of this build, I was convinced I wanted to make another uke and maybe even an acoustic guitar down the road! Since this was my very first uke, I have decided to keep it, so it's not for sale.

I LOVE this uke! Drop by the studio(appointment only) and give it a try - Virgil ;) 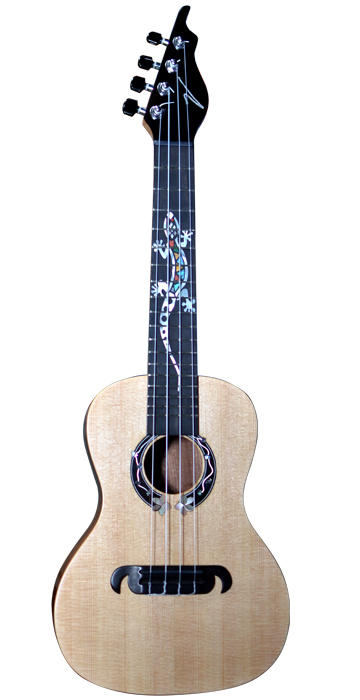