Every Virgil Guitar has some type of story to thell and VG #0037 "The Hunter" is no exception. Some time ago, a guitar student of mine Jim, was walking around on his property one day here in Florida and stumbled upon an exquisite relic... a spearhead dating back approximately 10,000 years ago which is considered the Paleoindian Period. A spear was rested on the atlatl with the end of the spear shaft inserted into the atlatl hook. The hunter held the atlatl grip and the middle of the spear in the same hand, then he hurled the spear from the atlatl. The atlatl acted as an extension of his arm, giving extra power and accuracy to the throw. The particular spearhead Jim found was masterly crafted by a hunter who used his skills to craft an amazing weapon. This spearhead also had a fracture in it that resembled a beast and that's all Jim needed for a theme for a Virgil Guitar! Jim commissioned world-renowned artist Stanley Morrison to come up with a rendition of his interpretation of this beast, then I had the opportunity to do the same on the fingerboard. I also had an opportunity to create a wood recreation of a spearhead that I inlaid into the body of the guitar. 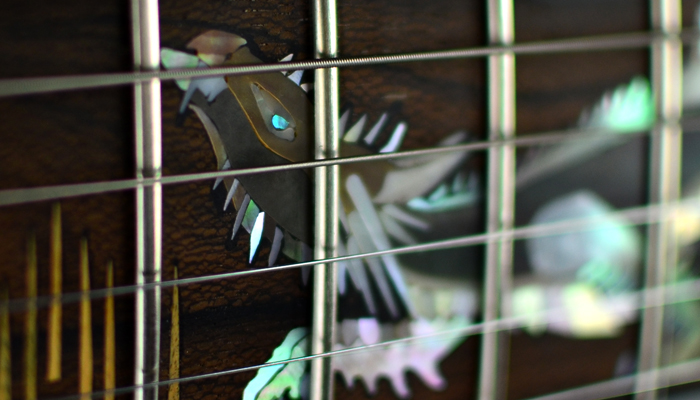 I had an idea for a guitar theme based on a stone age paleo American relic. A spearhead I found. The crafted stone revealed natural markings that I imagined to be a creature; a hunter-survivor like the people that crafted and used it. Virgil took this idea to heart. We commissioned artist Stanley Morrison, a master of mythical creatures. Stanley accepted the challenge and created an amazing character based on the markings on the spearhead. Virgil brought the creature to life with amazing inlay work on the fingerboard and embraced the ancient culture with other impressive inlays and carved features. The most impressive accomplishment of this project is the musical instrument that Virgil created. You would have to hold it and hear it to understand. Others that own a Virgil Guitar know what I’m talking about.

Virgil opened his workshop for anyone who wanted to watch him build this guitar via Facebook Live. It was very exciting to log on Facebook and watch him at work. The end of this project was bittersweet as I was excited to get my new guitar but saddened to know the adventure of the build had come to an end. Thank you Virgil for a wonderful guitar and the great journey that came with it. 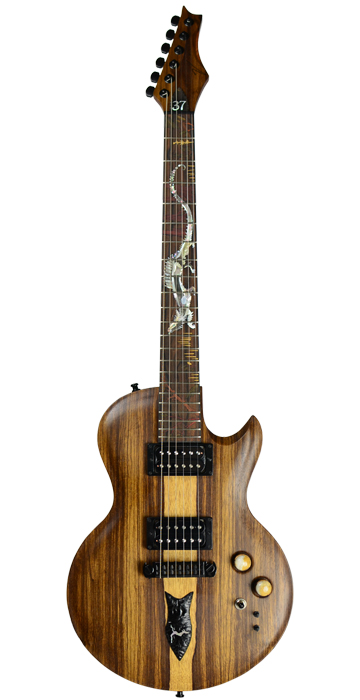