"The Kraken" was built by apprentice Dominic Bonaventura. I met Dom when he was 11 years old - he showed up as a guitar student. His father Tony, was the person who talked me into guitar building several years ago. THAT whole story is explained in the "Release The Dragons" documentary film. Dom fell in love with the Dogwood guitar build - VG No. 9 and when I approached him to become an apprentice here at Virgil Guitars in the summer of 2013, he was convinced that he wanted a guitar similar to the Dogwood build, which was the first FastBoy series guitar I had made. He spent several weeks here over the course of last summer, learning basic inlay, all the way to every step of building guitars. On August 25th, 2014, Dom finally plugged in The Kraken for the very first time. It was a proud moment for everyone. Dom is an exceptional guitarist and we have him do lots of demo videos here. He was 15 years old when he began this build and 17 when he finished. What an amazing accomplishment for a young man and he will remember this for the rest of his life. 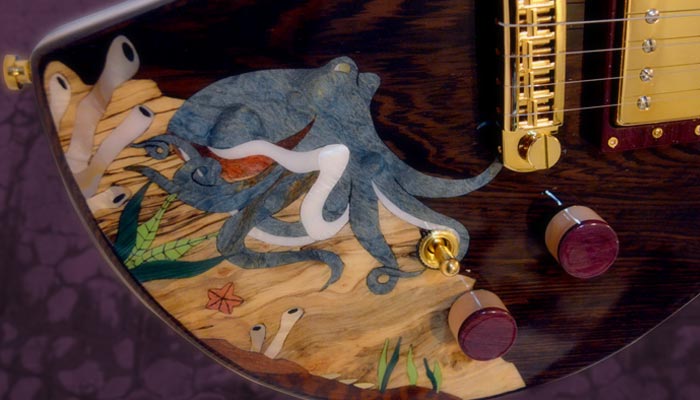 This journey started about a year and half ago. I am a former guitar student of Virgil and he's good friends with my dad, who had actually talked Virgil into building guitars a few years ago. They had the idea to have me apprentice with Virgil to build my own guitar. Of course I took the offer up, I mean who wouldn't? I knew his work was beautiful and could only imagine owning a Virgil Guitar. So this was a dream come true!

I didn't realize the amount of work and tedious steps that were involved until we jumped into the build that ended up taking over a year to complete. When Virgil challenged me to come up with my own original design, I always loved octopi and thought that it would be awesome to inlay a really cool octopus into a guitar. Virgil had started things out by teaching me the basics of Adobe illustrator. After some practice, I was able to do the illustrations for everything I wanted to inlay.

It was pretty amazing seeing it all come together little by little. I loved every part of it… well except final sanding and fretwork - that was tough, but It was all well worth it. When I picked up this guitar from the painter ("Moe" of MoeColors) and saw the shiny finish for the first time, I about fell over! It showed the true beauty and precision in a Virgil Guitar.

A couple weeks later, we finalized the build and I finally got to plug the guitar in for the first time. The sound was amazing, deep like the ocean. Hearing it for the first time was unreal, but it was hard to believe it was over. I will never forget all the times I came over and all the steps it took to build "The Kraken". I will forever be grateful for Virgil for bringing me on as an apprentice and going through the process of creating a true masterpiece!

My apprentice Dominic shows you the first guitar he built and then takes it for a test drive! 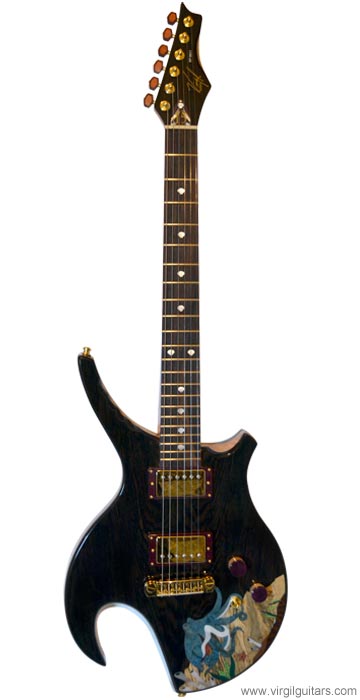