This is an amazing story! This guitar was a commission build for a woman here in Tampa Bay by the name of Christina. She came to me last summer with an unusual request - her nephew Michael and wife-to-be Laura, who were getting married in October, 2013 and wanted me to make a very special guitar for him, but was not sure how to go about this - mainly because she did not want to spend a ton of money on something he would not like and asked for help. Michael had been a guitar player already for 15 years and resides in Brooklyn and works in Manhattan.

A few days later, I came up with an incredibly sneaky idea... I told Christina that since I was still trying to grow my business, I had put together this "Mock Survey" to have random guitarists that I did not know personally, to fill it out, listing all elements that they look for in a guitar. The survey goes through the most particulars that people look for in a custom built guitar and at the end of the survey it simply asks the following question: "If you were to get an elaborate inlay on the fingerboard of the guitar, what would it be?". Christina send the bogus survey to her unknowing nephew and explained that I was really looking for unbiased opinions to help grow my company.

A couple weeks later, Michael e-mailed the survey to me and had filled out most of the questions and at the end of the survey, he had said that his guitar would have the Brooklyn Bridge and the Manhattan skyline in the background.

In the summer of 2013, I delivered the guitar to Christina, then she shipped it up to Laura's family and they gave him the guitar a couple weeks before the wedding. Michael was astounded with the surprise guitar and even played it at his wedding for his wife. 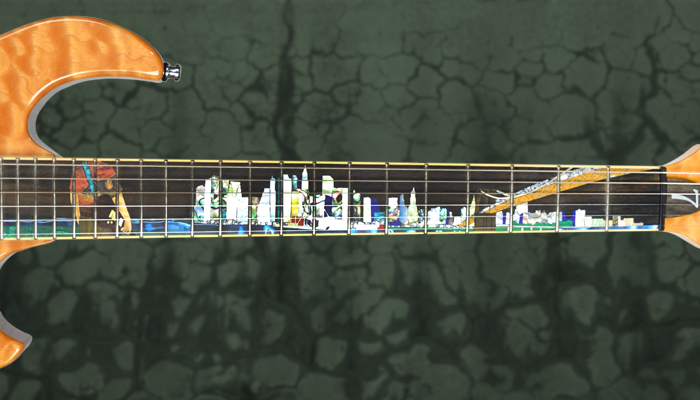 "First off, I'd like to say what an incredible surprise "The Bridge" guitar is/was. When "The Bridge" was first presented to me as a wedding gift from my Ciocia Krysia, I couldn't believe my eyes as to what I was seeing. To be completely honest, I had forgotten about the whole survey - which to be found out later by yours truly was nothing but a con to get into my head. A clever way to get me to spill my guts about my "dream guitar" to help out a Tampa luthier Virgil Mandanici to build his guitar building business.

Ultimately, the precision with which Virgil made this piece of BROOKLYN and New York City history - a one of a kind guitar emblazoned with the Brooklyn Bridge and Manhattan Skyline - remains unmatched in my opinion. His craftsmanship on the building of the body and the intricate spectacle of the inlay on the neck are truly AMAZING and INSPIRING. Virgil paid no expense to make my guitar shine and look iconic. Apart from the cosmetic look of the guitar - the handmade custom PUPs are out of this world. I'm a Gibson man at heart but these pickups WAIL. Love the coil tap to switch from Single Coil to Humbucker with ease. All the sustain and tones you get out of the PUPS whether clean or dirty are spectacular...would make even Eddie Van Halen jealous! I'll attest to the tone as I played "The Bridge" guitar at my wedding for my wife....a little Neil Young - "Harvest Moon". I plugged straight from guitar to DI BOX into the soundboard and holy F*%# the sound was astonishing...and that was technically the first time I plugged in...even unplugged this guitar sounds amazing. Once I had a moment to really sit down with the guitar I was able to plug into my 1967 Ampeg Reverb Rocket II with a vintage Tube Screamer for measure. DAMN. The warmth and cleanliness of the clean tone is amazing...the dirty tones - dirtier the better.

Virgil surely put his heart and soul into my build. More so, he placed a good amount of mojo into "The Bridge" making this guitar a player's piece, not a show guitar for a case. I would most certainly recommend his line of guitars to anyone...no matter what genre you play...you will be beyond pleased. A beautiful looking guitar is all fine and good, but one that looks astounding AND plays better than the guitar looks is hard to come by...and you will surely find it all in a Virgil Guitar."

The video shows Mike getting surprised with the guitar we built him!

Mike performs a Neil Young song for his wife at their wedding with The Bridge guitar! 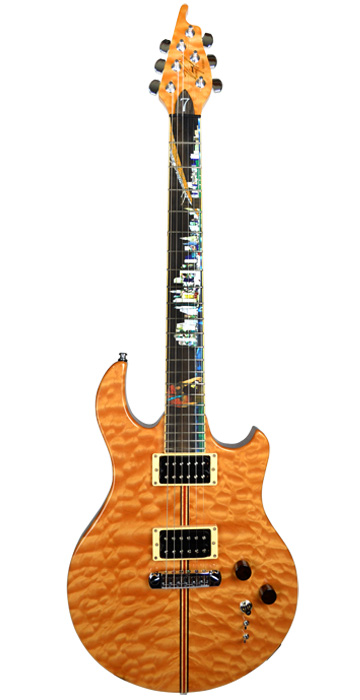